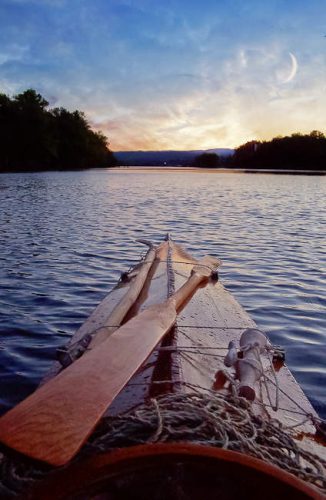 In Part 2 of this Expedition Gear series, I want to talk about the most important pieces of safety gear that are a part of your kayak system that don’t include what’s strapped on your body. A big part of this is onboard flotation. There’s never enough when it counts.

I like to be fairly minimal in my inclusion of safety gear– the more stuff there is to deal with, keep track of, the more likely you can run into problems when all hell breaks loose. Especially on deck, there’s a good likelihood of gear washing away in rough conditions, so you will want to make sure your boat has tie-downs of sufficient strength to keep everything in place. Seawolf’s skin-on-frame kayaks use Greenland-style latigo leather deck lines rather than bungees because they are much stronger and will hold onto gear (they don’t stretch really) even in very rough conditions.

Safety Gear Inside the Kayak (Flotation)

Safety gear inside the boat mostly consists of things that help to keep you and your kayak afloat. I consider both sea socks and float bags essential for touring in skin-on-frame kayaks, as they don’t usually have bulkheads and hatches. However, in studying various sea kayaking disasters it seems to me a number of fatal accidents could have been avoided if the paddler had not been relying upon bulkheads and hatches for flotation– hatches often tend to fail when they are most needed. So paddle with a sea sock and float bags, especially if you are planning on entering/exiting through surf.

1. The first line of defense is the sea sock. 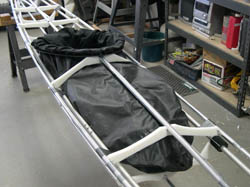 It’s essentially a bag you sit in that keeps water flooding the kayak confined to the volume of your lower body. It is not only great for keeping water infiltration low even in a capsize, but also for keeping sand and dirt and such out of the kayak. So far no manufacturer I know of really makes a very good sock (they’re okay), but you can make one from treated canvas (oilcloth), which feels better and also will be custom fit to your kayak’s cockpit coaming. Here are some instructions from the Qajaq USA’s Masik Newsletter.

2. Float Bags fill the spaces behind bulkheads so that if they fail, you will still be protected. In the case of skin-on-frame kayaks, float bags are a good backup to sea socks, and can actually double up with cargo drybags, in the case of Corey Freedman’s baidarka bags. If you are expeditioning in a SOF, these bags are the best thing out there right now, until someone makes them out of a tougher oilskin or canvas.

What to do when you have them filled with cargo? Fill them up with air anyway when going into rough stuff (you’d be surprised how much they can take), and rely on your bracing, rolling, sea sock in that order when conditions are easier.

Hope that helps some of you figure out the basic flotation layout of your boat, no matter the type. We skin-on-framers have to be extra careful, but I’d wager many more accidents happen because of thoughtlessness than a lack of bulkheads. Be prepared when you go out and you’ll come home with your kayak!

One response to “Kayak Expedition Gear #2: Safety Gear in the Kayak”