The Day I Was Almost Swallowed by a Humpback Whale

“Sea Lions!”, my friend Tom yelled to me, barely audible over the chaotic roar of thirty lightning quick flippers, surfacing and disappearing in a boil of water to my right. Then one thumped into my kayak hull and I knew I had maybe 10 seconds. I pulled my camera away from my face, laid it sideways on my lap above a pool of saltwater on my skirt. 6 seconds… I nabbed my paddle, flipped it and planted it into the water with the awkwardness of going too fast.

I could suddenly hear myself breathing as my heart became audible and I pushed backwards with a stroke. 3 seconds… A few more strokes and my kayak gained momentum and slid, frictionless, through the water, away from the sea lions. And then suddenly the sea lions vanished beneath the surface. 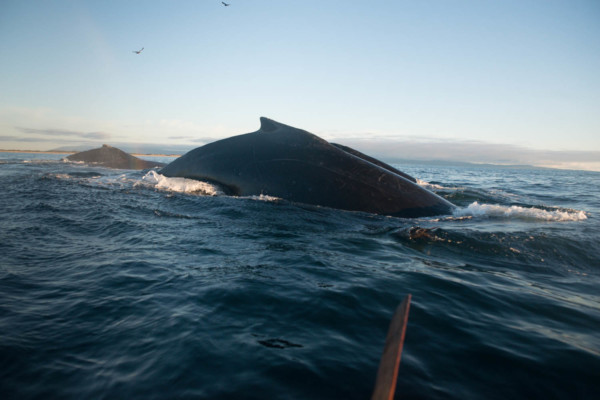 One quiet moment passed but I kept paddling, then swiftly raised my camera with one hand. Suddenly, the ocean in front of me burst open as three humpback whales lunged, enormous jaws agape, straight out of the water where I had been moments earlier. Those 50 ft whales with jaws 15 ft long pushed up and footlong anchovies shot everywhere, sparkling silver amidst white foam. That’s the goal. They were here for the anchovies. We were here for the whales.

In Monterey Bay, California, anchovies school in large numbers and attract humpbacks who feed on them through a technique known as bubble-netting. The whales swim around a school in circles, releasing a steady stream of air bubbles. The fish won’t cross this wall of bubbles and become corralled into a tight ball, at which point the whales dive deep and come up, mouths wide open, swallowing ocean and prey alike. 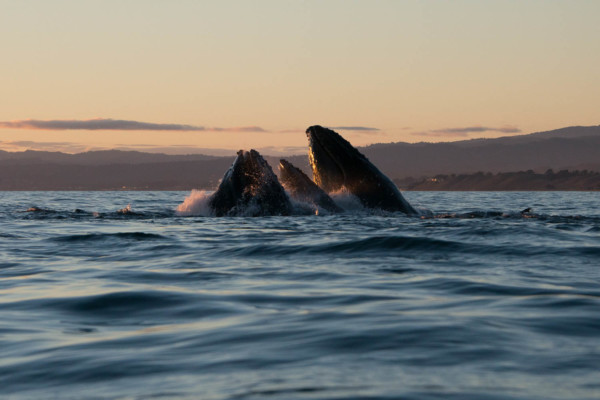 Tom and I had paddled out in our handmade traditional kayaks, having noticed the rare coincidence of a small ocean swell and whales not far offshore. We shot out of the marina a few hours before sunset, fully loaded with photo gear. Straight out of the gate we heard them blowing, the smell of a fish market lingering in the air.

Minutes later, a lone humpback surfaced in front of my bow, ten feet away. I stopped paddling and braced, one hand on my paddle, the other on my camera. It snorted and blew a fine mist sky-high, which landed all over my kayak and lens. I was still clicking despite my heart having stopped beating. 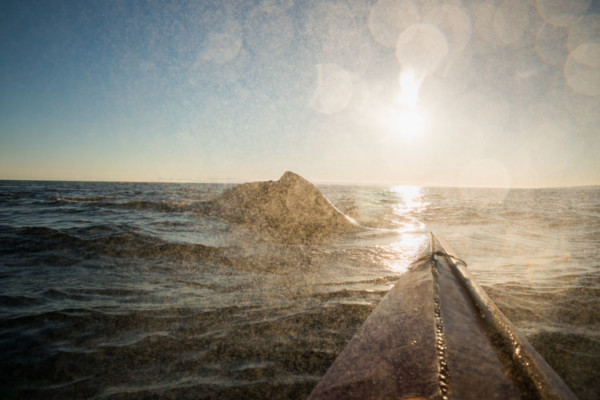 An hour later, we spotted a group of feeding humpbacks and paddled to about 100 yds away, careful to avoid disturbing them. From afar I watched and learned the patterns of their behavior— first the whales would dive, exposing their tail flukes, and then the sea lions and pelicans would start diving in a frenzy. Moments later the humpbacks would come crashing out of the deep blue as they inhaled and strained anchovies through their baleen. The thing about wild creatures, though, is that they don’t stay put very well. The whales moved around us as I watched, and then they were amongst us. 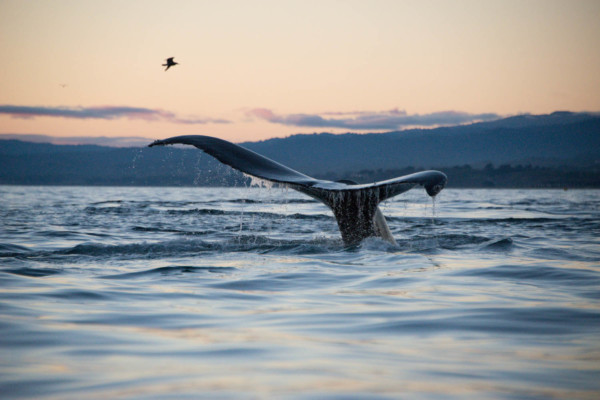 Truthfully, despite having paddled thousands of miles in beautiful waters and having had lots of wildlife encounters, this one tops the list. To be in the gaping maw of wild creatures in their environment is a bit transcendental. As a person, I died that evening, and was born again, like a sudden gust of wind or a wild thing on a wild sea.